None of the series give the option to turn on the siren on the car. Ambulances are seen driving around the city in every game in the series, but it will not, unlike it will in the Grand Theft Auto series, appear whenever somebody gets killed. Therefore, their emergency lights/sirens are never seen or heard.

• The Ambulance Are The Vehicles Had Mostly Appear In Gangstar Series, Others Are D340, & Taxi

• Unlike Grand Theft Auto Series, The Siren Are Cannot Toggle.

• Also Unlike In GTA Series, The Ambulance Drivers Are Not Seen Paramedic The Dead Pedestrians. 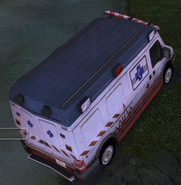 Ambulance in Gangstar Vegas.
Add a photo to this gallery
Retrieved from "https://gangstargameloft.fandom.com/wiki/Ambulance?oldid=8048"
Community content is available under CC-BY-SA unless otherwise noted.