The game is set in a miniature Los Angeles, and is a three-dimensional (3D) version of the previous installment Gangstar 2: Kings of L.A., thus sharing pretty much the same storyline and same protagonist, Pedro.

"Move to the West Coast and immerse yourself in L.A. gang life with Gangstar. Explore more realistic environments than ever for a unique gameplay experience. Complete 50 different missions that combine the best of action games and driving games."

Having escaped a Mexican prison, the basis of the storyline is to do jobs to earn money, while gaining new friends.

Pedro and Juan have just escaped a Mexican prison and gotten to L.A. Pedro and Juan drive to a phone booth to contact L.C., Juan's old friend but an unnamed thug gets Juan angry when he tells Juan to "find one of your own phones". Pedro beats the unnamed thug up to death and Juan contacts Tia Carla to find out where L.C. lives. After finding out where he lives, Juan and Pedro go to his house in Calle Ventura where they meet with L.C.. L.C. tells them to go pick up his son, Lil' T because the Los Locos Muertos stole his car. Pedro and Juan pick up Lil'T, they then go to the nearby gun shop and get Pedro to buy a gun to protect himself. When they get back, L.C. tells them to "go play for a while" and to come back soon. L.C. also remarks that the Los Locos Muertos are becoming a problem and that he should warn El Toro about it before something happens.

The game is an open sandbox/mission-based one that uses a 5-star wanted system. In the game, you can earn achievements by doing certain things.

After committing crimes in Gangstar: West Coast Hustle, the player acquires a wanted level in the form of badges. Unlike the newer games, no special vehicles spawn when attaining high wanted levels, the only thing that changes is the amount of police officers that spawn. To get rid of this wanted level, they either need to collect stars scattered around the map or they can "corrupt" the police by bribing them through the services option in the pause menu. The player can attain a maximum of 5 badges. If the player is arrested, the player will be initially fined $100. The fine rises for each arrest.

The combat is pretty straightforward as the player only needs to press the attack button several times to win a fight, but they can only attack one person at a time. Sometimes, characters holding guns will not drop their guns when they are killed. You can either kill certain NPCs to get weapons or buy the weapons in a Bullet Time! shop.

The vehicles are handled either by having to physically move the device left and right or by steering wheel and a forward and brake pedal. You also have the ability to drift. If your vehicle gets damaged, you can go to Fix-O-Matic to get your car fixed. You can go to Dale Deal to buy cars or you can just carjack cars.

Differences with Kings of L.A.

Differences between the regular and HD version

The following is a list of the weapons featured in the game, which are actually the same as the previous renditions, save for the inclusion of the grenade launcher: 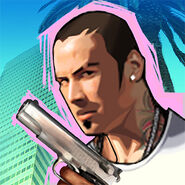 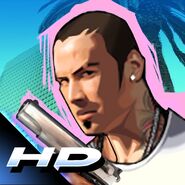 Icon of the HD version 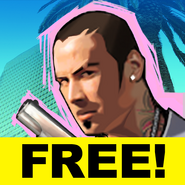 Icon of the free version

Unsure where icon came from, but is apparently one of the icons of this game.

The game Gangstar: West Coast Hustle was based on

Menu of the HD version

Pedro and Juan talking to the Leatherskin Butcher

Pedro participating in a race

Pedro hitting an Ambulance
Add a photo to this gallery

Retrieved from "https://gangstargameloft.fandom.com/wiki/Gangstar:_West_Coast_Hustle?oldid=13241"
Community content is available under CC-BY-SA unless otherwise noted.